Today Alzheimer Europe has published two new reports. The first being a discussion papers highlighting the need for ethically sound involvement of a more diverse set of people with dementia in all aspects of research, and the second presenting the findings of its collaborative analysis of recent prevalence studies and setting out updated prevalence rates for dementia in Europe.

The ethics working group set out in 2019 to explore different ethical challenges affecting the involvement of people with dementia in research. Ethically sound involvement in research is about how people with dementia are treated but also about who sets the research agenda, who is involved, at what stage and in what capacity. People with dementia should be involved in research not only as participants but also in the context of Public Involvement. A comprehensive review of the literature and rigorous debate led to the publication of a discussion paper and recommendations which are targeted at researchers, members of ethics research committees and funders of research. Valuable input was also provided by the European Working Group of People with Dementia and several independent experts.

People with dementia form a diverse heterogeneous group made up of people with multiple/intersecting identities and characteristics. There are, for example, people with dementia from different ethnic groups, of different ages and gender identities, and with different disabilities, levels of education and socio-economic backgrounds. People from minority and marginalised groups continue to be underrepresented in research, resulting in their experience, perspectives and needs being ignored.

Multiple characteristics and factors need to be considered when trying to attract a diverse set of people to research. However, it is important to avoid locating ‘the problem’ in the individual, as this detracts attention from the way that structures, organisations, procedures and systems create problems and lead to discrimination and marginalisation. The tendency for researchers to consider some people with dementia as ‘hard to reach’ may result in them overlooking their own responsibilities with regard to the promotion of diversity and inclusive research. At the same time, the requirements and methods needed for inclusive research must correspond to those required for good quality and hence ethical research. Failure to find the right balance would result in unsound research which needlessly exposes people to risk, inconvenience and burden.

It is hoped that this discussion paper will promote useful and constructive debate and encourage the ethically sound involvement of a more diverse set of people with dementia in all aspects of research.

The discussion paper can be found here: http://alzheimer-europe.org/Publications

Findings of AE collaborative analysis of recent prevalence studies and setting out updated prevalence rates for dementia in Europe.

Over the past three decades, a number of significant pieces of work have been undertaken to estimate the prevalence of dementia at a European level, including:

As the most recent of these studies is six years old, Alzheimer Europe recognised the importance of establishing more recent dementia prevalence estimates, using the most up-to-date academic literature on the subject.

The key findings of this new Alzheimer Europe report include: 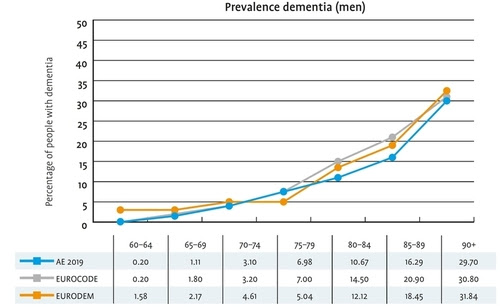 1. For men, there has been a reduction in the prevalence of dementia across all age groups over the past ten years when compared to Alzheimer Europe’s 2008 EuroCoDe estimates. 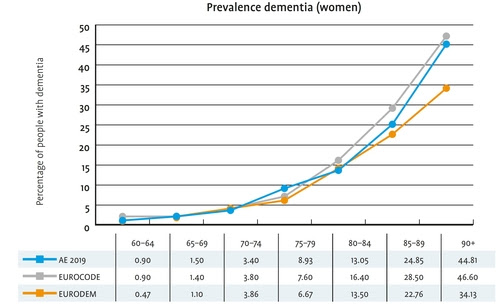 2. For women, apart from the age group of women between 75 and 79 years, there has been a reduction in the prevalence of dementia over the past ten years when compared to EuroCoDe.

3. The number of people living with dementia in the European Union (EU27) is estimated to be 7,853,705 and in European countries represented by AE members, 9,780,678. Compared to its earlier estimates, this constitutes a significant reduction from 8,785,645 for the EU27 and from 10,935,444 for the broader European region. Women continue to be disproportionately affected by dementia with 6,650,228 women and 3,130,449 men living with dementia in Europe. Alzheimer Europe’s Yearbook also highlighted significant limitations in the available research into dementia prevalence and a lack of research into:

“It is promising to see that healthier lifestyles, better education and improved control of cardiovascular risk factors seem to have contributed to a reduction of the prevalence of dementia. However, our report also demonstrates that the number of people living with the condition is set to increase substantially in the years ahead, which will only place greater pressure on care and support services unless better ways of treating and preventing dementia are identified. If people with dementia, their families and carers are to receive the high-quality and person-centred care they need, governments must ensure their health and care systems are ready to meet this demand and greater investments in research into the treatment and prevention of dementia are needed.”

Data from the following studies has been included in the collaborative analysis: The discussion paper and report can be purchased or a copy freely downloaded from the Alzheimer Europe website: http://alzheimer-europe.org/Publications